History of the Harkness Estate

Originally a 237-acre working dairy farm with a herd of prize Guernsey cows, the Eolia estate had 65 employees, 35 of whom were year-round support staff.  In addition to its stunning floral gardens, designed by Beatrix Farrand and later Marion Coffin, the estate featured vegetable gardens, and fruit orchards.  Not only did the farm provide food for the Harkness’s time in residence from May until September, but also enough produce for their main home in New York City as well as next-door Camp Harkness. Fresh farm bounty was delivered to both locales in a 1938 Model A truck stiil here on the property Also, each Friday, the farm hands were allowed to take butter, milk, cheese and produce home to their families.

A Dairy Barn once stood in the maintenance area near Great Neck Rd., but was lost to fire in the 1970’s.

Mary took a portion of the estate to start Camp Harkness in 1920 for children with polio.

Mary and Edward Harkness – The Harknesses at Eolia

Mary and Edward Harkness were married in 1904.  They bought Eolia from Mary’s sister and her brother-in-law, Jessie Stillman and William Taylor in 1907. Eolia was one of their seven homes and reputed to be their favorite. They resided here in Waterford from May until September.  In June, they enjoyed the annual Yale/Harvard Regatta. On July 4th each year, Mary’s birthday was celebrated with a party held at Camp Harkness.  In 1920 Mary had apportioned part of property to establish Camp Harkness, a place for learning, medical support and recreational enjoyment for children afflicted with polio. 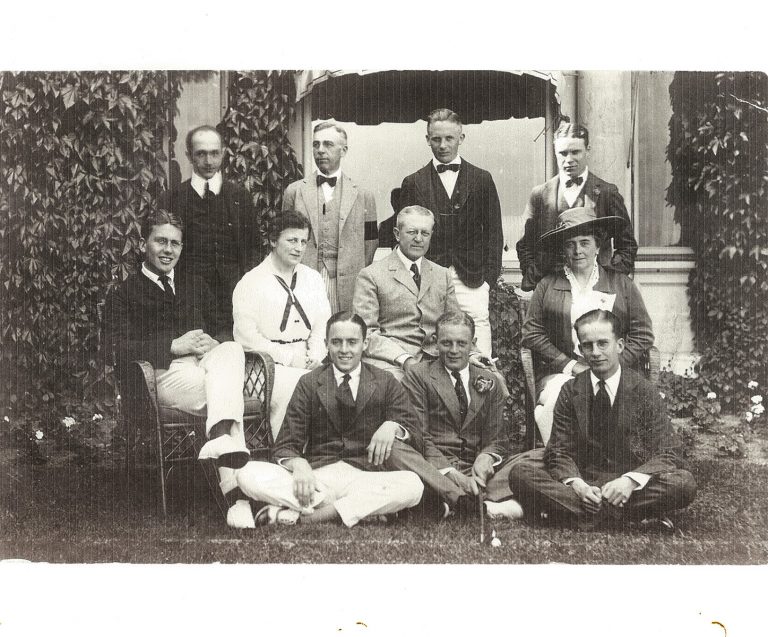 Mary and Edward were very private people who avoided public attention and acclaim. Despite their incredible history of philanthropic giving, they studiously avoided speeches, ribbon- cuttings and self-congratulatory publicity.

They did not host lavish parties, but welcomed close friends for intimate visits.  Some of these guests were some of the most influential people of their time- the J.P. Morgans, J. D. Rockefellers, and Lord McMillan to give a few examples.

Any celebrations with family and friends were most frequently held at either Camp Harkness or upon their 130 foot steel hull yacht, the Stevana. The yacht was anchored out in the Sound near Eolia or at their private dock in New London.

Besides sea bathing, other recreation activities included time on Edward’s private 9-hole golf course , which wrapped around a portion of the estate and “cigar time”  in the Carriage House’s: billiard room, squash court and bowling alley.

Mary and her guests enjoyed strolling through the gardens and afternoon teas under the latticed roofed Pergola that overlooks the Italian or West Garden.