Edward Harkness at the turn of the last century was the 7th wealthiest person in the nation. Edward and Mary, who were childless, chose to direct most of their considerable economic resources toward philanthropic purpose. Du 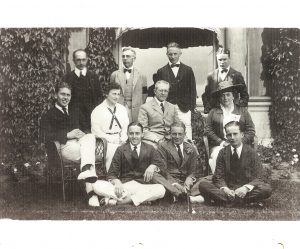 ring their lifetimes, they donated the equivalent of $2 billion in today’s dollars toward initiatives in health and education, and toward acquisition of art works for the public. They also provided handsomely for their employees who always regarded them with both affection and admiration.

Anna Harkness, Edward’s mother, instilled in her son a philanthropic spirit that colored his whole adult life.  She founded the Commonwealth Fund “for the welfare of mankind” in 1918 with a 10 million seed. Edward was the Commonwealth’s Fund’s first president and managed the Fund until his death in 1940 at the age of 66. The Fund supported and supports medical and educational endeavors here and abroad. Today the headquarters is housed in Mary and Edward’s original townhouse on 75 St. and 5th Ave in New York City.  It remains one of the largest philanthropic organizations in America.  At present, the fund promotes high performing health care systems to uninsured Americans.

The Harknesses gave generous support to many educational institutions, underwriting construction of the Harkness Clock Tower and four quadrangles at Yale as well as the lovely Harkness Chapel on the CT College campus. They donated substantial funds to Columbia, Yale, Phillips Exeter, Harvard, St. Paul’s, Connecticut College and many others.

Edward donated a gift to Philips Exeter, one of his alma maters, which precipitated a “revolution” in teaching, the “Harkness method” which promotes learning in interactive and intimate seminar settings. Edward was a bright, but very shy student, who found the didactic regimented style of teaching of the late 1800s quite intimidating during his youth. He sought “a better way” to bring out the best in every student.

Though Mary had no children of her own, she showed her love for the young (particularly those poor and in ill-health) by establishing Camp Harkness for disabled children on part of the Eolia estate. Each year, children between the ages of six and sixteen were brought May to September from NYC hospitals to live at the Camp. She felt that fresh air, fresh food from the estate’s farm, and salt water would have healing qualities. She staffed the Camp with nurses, doctors, and nutritionists to support the children who were primarily afflicted with polio, She provided a staff of teachers and also brought in artists to entertain the campers with music and play performances.

Mary and Edward traveled extensively and collected an eclectic mix of art- works. Edward served on the Board of Directors at the Metropolitan Museum of Art for thirty years. In that time, he travelled to Egypt 11 times to acquire artifacts for what is now the Egyptian Collection at the Met. He helped underwrite Carter’s archaeological excavation of Tutankhamen’s tomb and was present at the tomb’s opening. Both Edward and mary donated their extensive and diverse fine art acquisitions to the Metropolitan upon their deaths.